GBP/USD, EUR/USD Rates at the Mercy of US Trade Talks

The return of risk aversion saw S&P 500 futures decline alongside the ASX 200, as Australian Covid-19 cases spiked to the highest number since April, with the local currency following the benchmark index lower.

The US Dollar shot higher against its North American counterpart, as Canada’s credit rating was downgraded in response to the recent surge in government debt.

The US Dollar may continue to recover against its North American counterpart, fuelled by the recent surge in risk aversion and a one notch downgrade to Canada’s AAA credit rating.

Citing the spike in emergency spending “to counteract a sharp fall in output”, ratings agency Fitch expects government debt to GDP to surge from 88.3% last year to 115% in 2020, “as parts of the economy were shuttered to contain the spread of the coronavirus”

Despite remaining contained within a descending channel, technical indicators suggest a move higher may be on the cards, with bullish divergence on the RSI reinforced by the recovery of the momentum indicator from the yearly extremes.

Convergence of the 50-MA (1.3720) and channel resistance remains a significant hurdle for buyers to overcome. A close above this pivotal resistance level could signal a resumption of the primary uptrend, with key regions of interest falling at the 1.38-handle and 50% Fibonacci (1.3810). 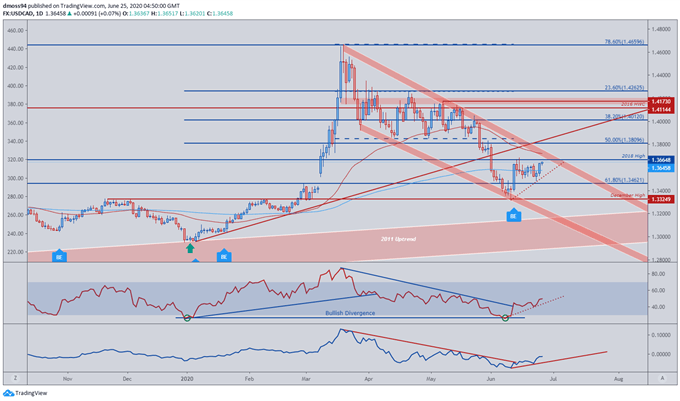 EUR/USD – EURO AT THE MERCY OF US-TRADE NEGOTIATIONS

EUR/USD plunged after US President Donald Trump announced the possible imposition of $3.1 billion new tariffs on exports from the European Union, as trade negotiations between two of the world’s largest economies continues to stall.

A formation of a Bearish Engulfing candle at the pivotal 78.6% Fibonacci (1.1312) underscores the downward pressure escalating geopolitical tensions could have on the proxy for global growth, as price retreated to support at the January high (1.1240).

Despite this steep decline EUR/USD continues to track within a potential Bull Flag continuation pattern, as price remains constructive above key support at the 61.8% Fibonacci (1.1167).

However, technical studies suggest that further downside could be on the horizon, with both the RSI and momentum indicators snapping their respective uptrends. 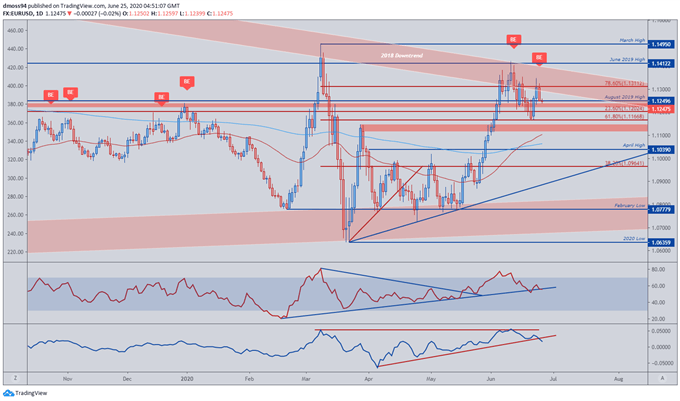 After slicing through its 12-week uptrend earlier this week, GBP/USD looks poised for further downside, after the formation of a Bearish Engulfing candle at 38.2% Fibonacci resistance (1.2548).

Selling pressure may intensify should the RSI snap its constructive 3-month trend, with the momentum indicator suggesting increasing bearish bias as it continues to strengthen to the downside. 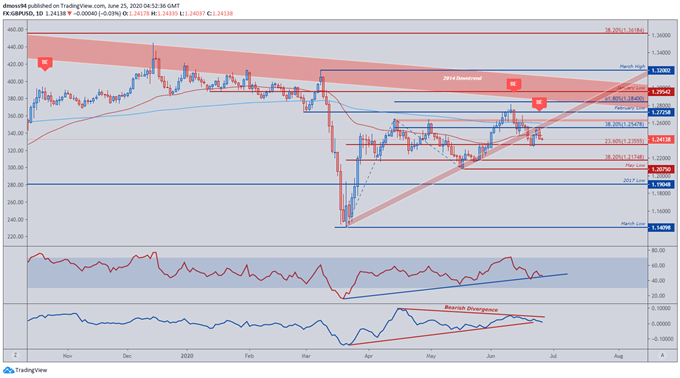 NZD/USD initiates a series of lower highs and lows after taking out the January high (0.6733) as RBNZ Governor Adrian Orr strikes a dovish outlook for...

The US Dollar has been rising versus the Singapore Dollar, with USD/SGD on the cusp of potentially breaking above key descending resistance from March...

Stay current with our latest insights